The series of activities started with the Masaza football tournament match finals.

Donning a yellow Emirates T-shirt, King Oyo arrived at the playground at around 5:00pm for the final match between Kyaka and Bunyangabu counties.

Kyaka County from Kyegegwa district emerged champion after it scored one goal in the first half.

Efforts by Bunyangabu County to secure a goal during the second half of the match did not yield anything.

After an extra time of three minutes, the last whistle that concluded the game went off. 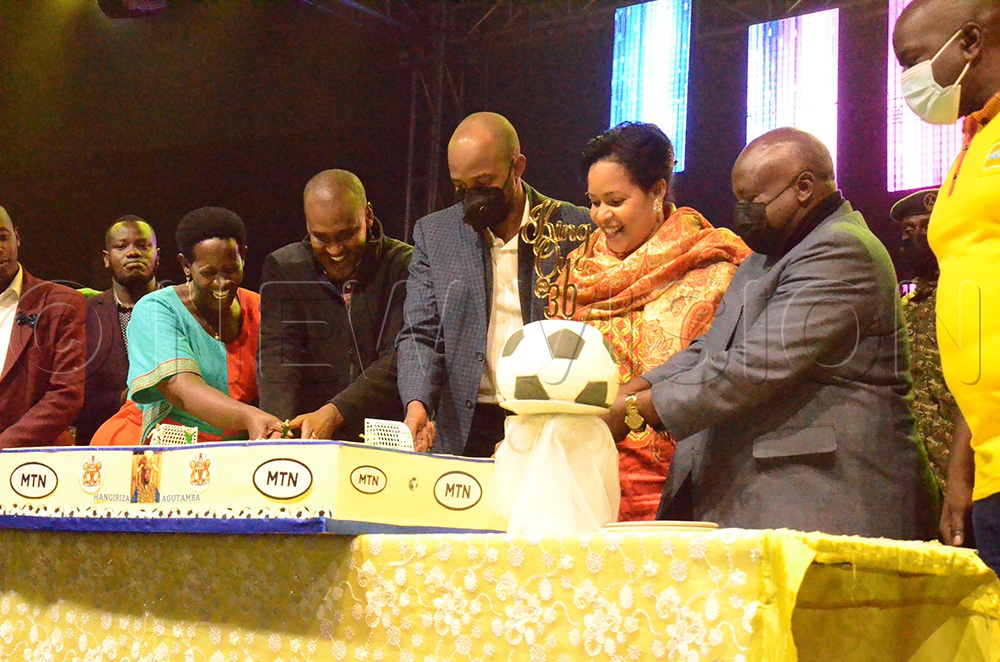 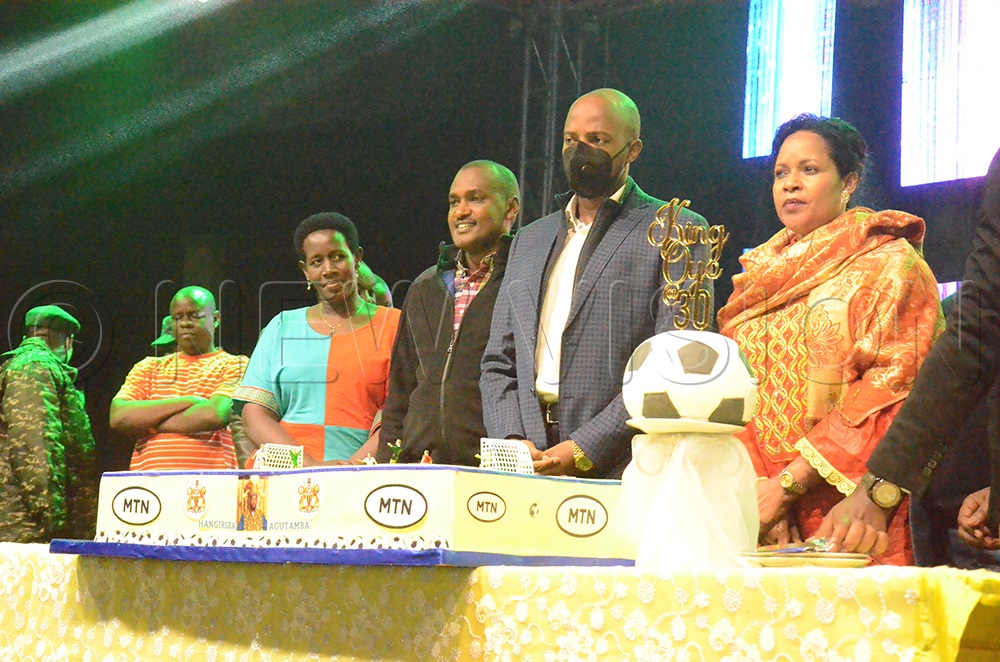 After the last whistle went off, King Oyo stood up from his royal seat to honour the winning team.

He was later joined by other guests seated in the pavilion tent that included central and local government leaders, the kingdom minister and members of the royal family for the standing ovation.

The king later joined the jubilating crowds in clapping hands as a sign of victory. This he did for a couple of minutes while standing. 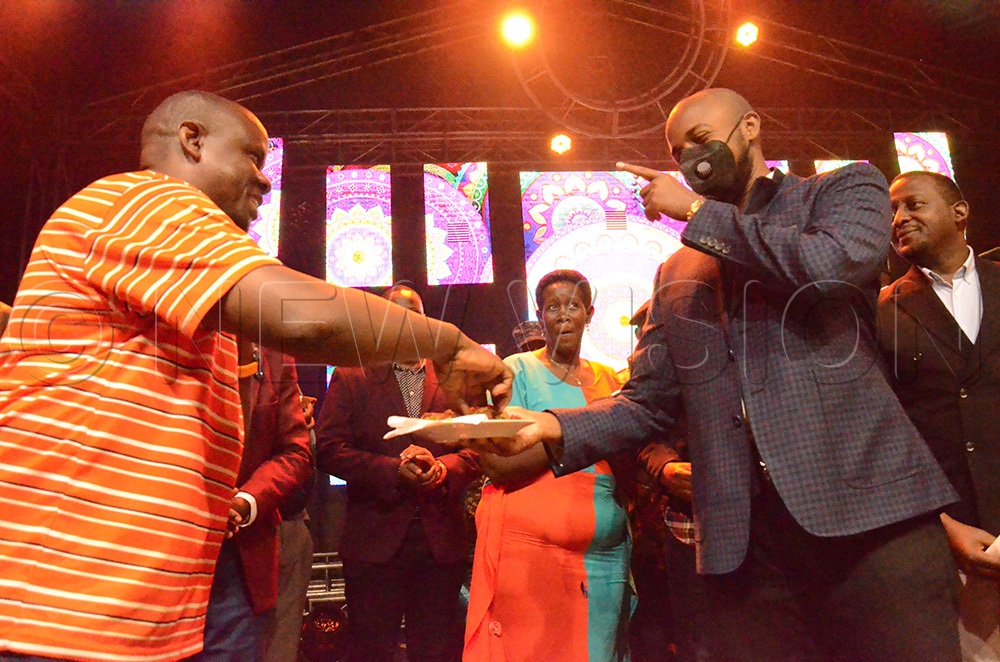 Security found a hard time controlling the excited supporters of Kyaka after the last whistle of the match went off.

All the Kyaka team fans poured into the playground despite earlier warnings to maintain their positions after the match.

The king rewarded the Bunyangabu team with a cash prize of sh3m, while Kyaka, the champions of the tournament, walked away with sh5m and a trophy.

Geoffrey Mucunguzi, the goalkeeper of the winning team, received the trophy from King Oyo handed on behalf of the entire team.

Later, he presented it to the team members amidst shouting and jubilation for the victory. 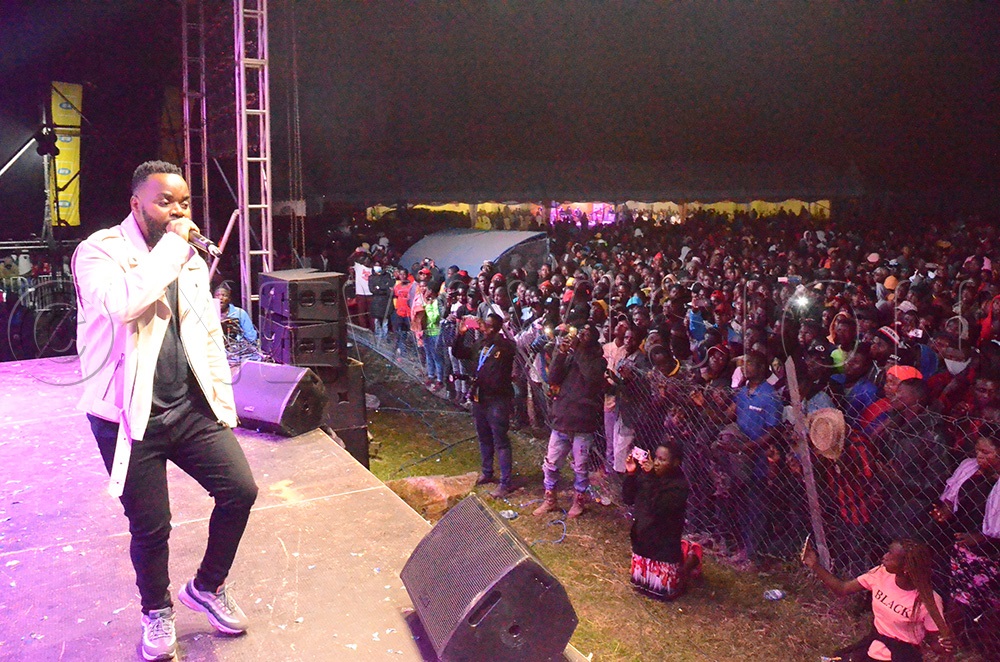 King goes back to Karuzika

After handing over the trophy at around 7:30pm, King Oyo was escorted to his motorcade which drove him back to his Karuzika hill Palace in Fort Portal.

“The king is off for a while, but will later join us again for the cutting of his birthday cake at midnight,” Zebidayo Mwesige, the director of ceremonies for the day, announced to the crowds.

King Oyo waved to the jubilating crowds as he stepped off the stage, attracting more cheers from his loyal subjects. 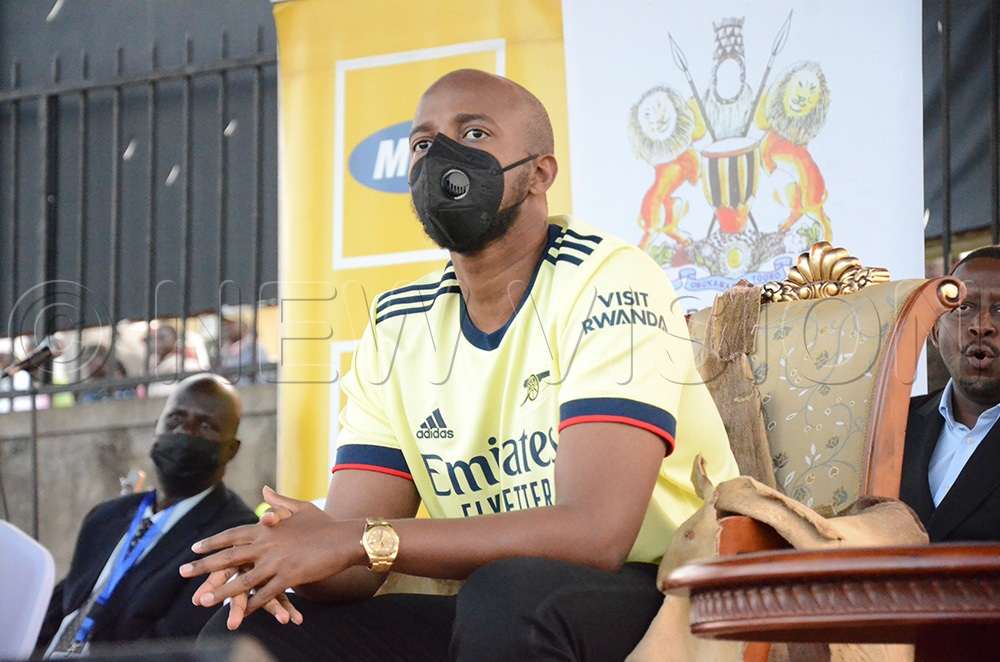 Bernard Tungakwo, the kingdom’s prime minister, applauded all political leaders for their participation and support for the Masaza tournament cup.

“At all levels across the entire Kingdom, the Masaza cup tournament has received tremendous support from all the leaders,” he said.

Tungakwo also appreciated the subjects for loving the king, their kingdom, and their culture. 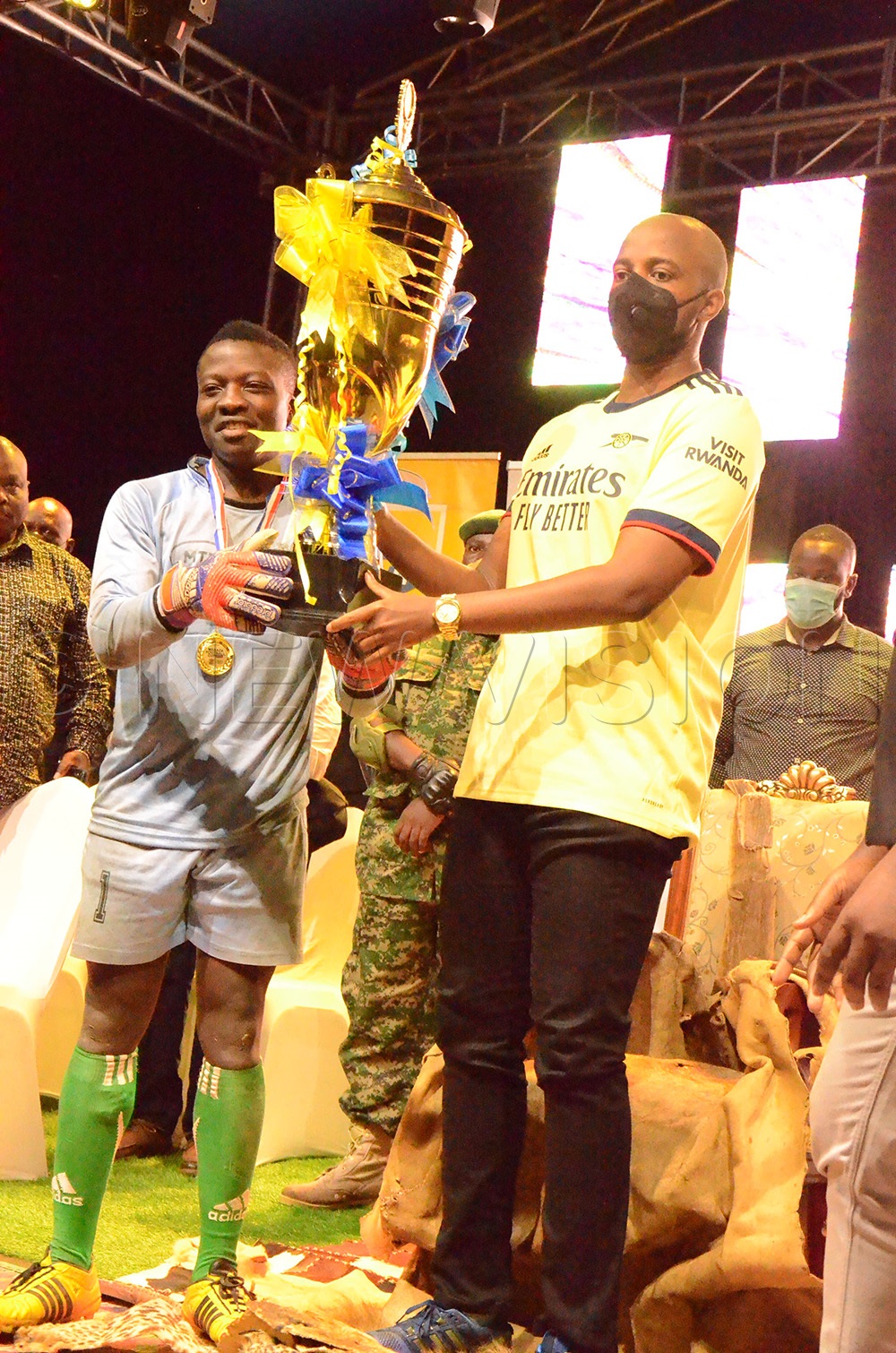 Health in the tournament

During the cup tournament across the kingdom, several health activities were carried out.

They among others included HIV testing and counseling, blood donation, COVID-19 screening, testing, and vaccination.

“The idea of the king is to promote good health through games and sports,” Tungakwo said.

According to Tungakwo, the kingdom is using games and sports as a tool to mobilise the youth for talent development and other developmental initiatives.

“In doing all this, the promotion of good health is our priority because realistic development can mainly be achieved by a healthy population,” he said. 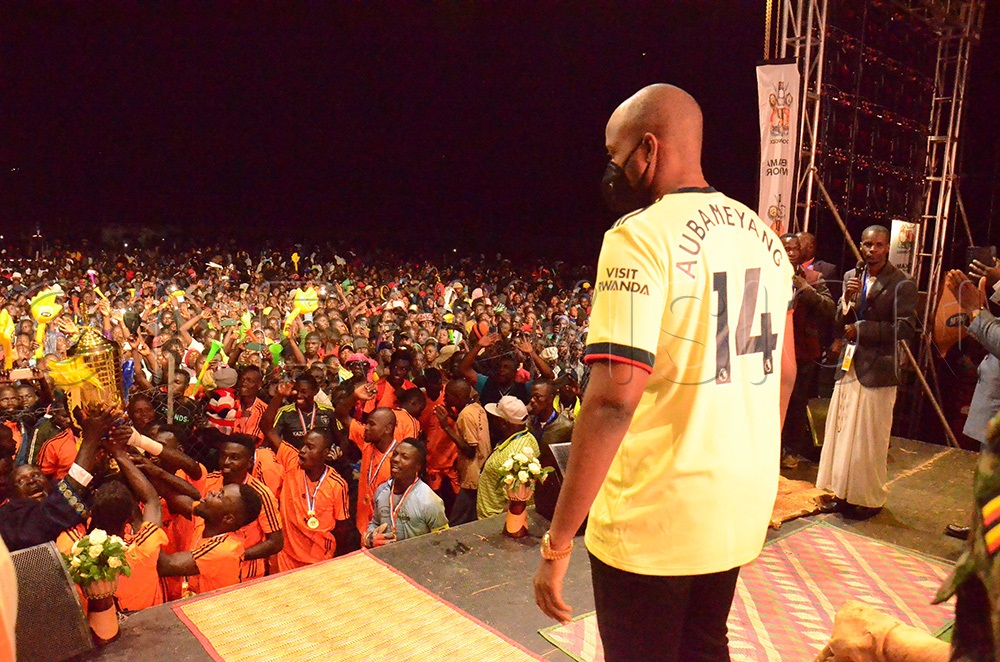 At past 11:00pm, ushers started arranging the royal birthday cake on the stage.

After a few minutes, the cake, which was designed in form of a playground and a football, was ready for cutting, and slightly before midnight, the king arrived from his Karuzika Palace.

This time, Oyo was in the company of his mother Queen Best Kemigisa, and agriculture minister Frank Tumwebaze, among other dignitaries.

Straight away, King Oyo and his entourage ascended to the stage and at exactly midnight, they cut the birthday cake amidst jubilation.

Fire works was displayed to congratulate and welcome Oyo into his 30th year of existence.

Later, the ushers served the cake to all the other guests who were seated in the VIP tent at Buhinga grounds.

Both local and national performing artistes were given chance to showcase their talent as they entertained the king’s subjects during the birthday concert.

Among the artistes who stood out were Navio, Aziz Azion, Beenie Gunter, Ayesiga Muzamil, Easy Linton, and Tony Blackman.

These performed amidst the presence of the king who attended the concert up to the late night.

King Oyo took over as traditional ruler of Toro Kingdom at the age of only 3 years making him the world’s youngest monarch leader.

Because he was still a minor, King Oyo then ruled with the help of the Kingdom regents and crown bearers who were running the affairs of the Kingdom.

In 2004, King Oyo took over full control of his Kingdom from the regents and crown bearers after he clocked 18 years and alot has since then been achieved.

Edward Kasaija, the kingdom youth minister, says the king’s main dream is to ensure that the youth have a positive mindset change.

“This he is doing by walking the talk to be able to show all these youth the right direction,” Kasaija said.

With support from the Government and partners, the king has so far opened up a fully-equipped youth centre at Mucwa and also a model farm in Bugaki, Kyenjojo district.

“The king wants youth to be able to use these facilities for skills development so as to be self-reliant,” Kasaija said.

At King Oyo’s model farm in Bugaki, all the best agronomic practices of mulching and spacing, among others, are being followed to the letter.

“Farming is the backbone of our economy, but unfortunately, very few people are doing it as a business and this is the reason why we have remained poor. We must be able to earn foreign exchange through farming,” David Sabiti, the kingdom agricultural minister, said.

Sabiti said the king’s dream is to cultivate the love and passion for farming among the youth.

“The youth are energetic and strong enough to do anything in respect to farming once they are guided and empowered with knowledge,” he said.

A campaign to market and promote tourism in Toro Kingdom is also on.

“Toro is so much gifted by nature and there is so much that we need to tap into and exploit to benefit both the Kingdom and individual subjects of the King,” Joan Kantu, the kingdom tourism minister, told New Vision.

Other subjects speak out

Robert Mwesige from Mwenge Kyenjojo district wants the king to now consider establishing his own family now that he is of age.

“We are happy that our king who ascended to the throne when he was just a toddler at the age of three years has now grown into an adult. It is high time he identified a wife,” he said.

Mwesige said he and other subjects are anxious to witness the king marrying and wedding his wife.

Maria Rwabyomere, a resident, has asked the king to now dedicate more time to staying with his subjects.

He reasons that the king could have delayed getting married due to the fact that he is always under guard and also a way to Kampala and other areas.

“The king should be allowed to move freely in his Kingdom. He should now concentrate and dedicate more time to staying in Toro. This will help him run the affairs of the kingdom even better,” she said.